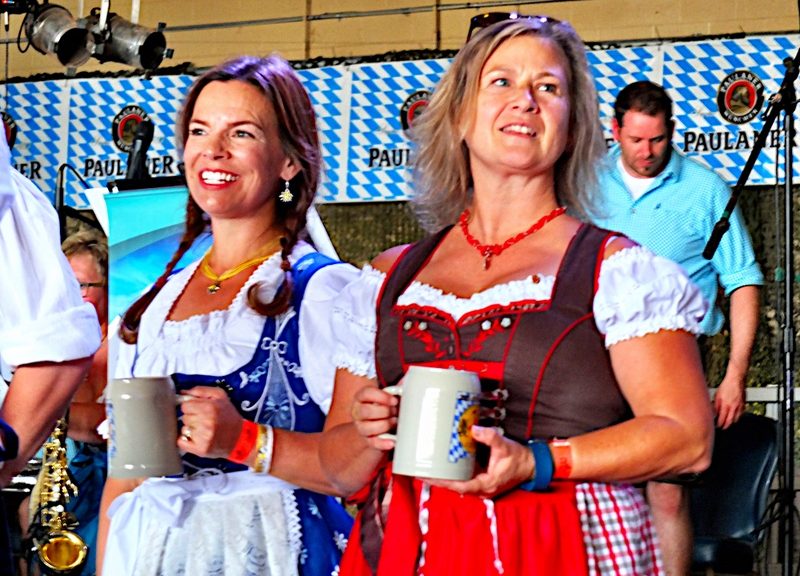 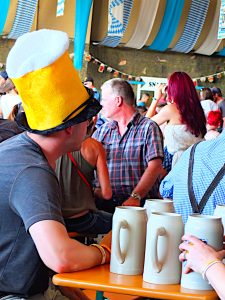 It is hard to believe that autumn days are already upon us, but one thing that this time of year means is a roadtrip to take part in a unique event held each September in Alamogordo, New Mexico.  As far as I can determine, there is only one Oktoberfest celebration in the USA that is put on by actual Germans, and it takes place at Holloman Air Force Base near Alamogordo.

Alamogordo is home to largest community of German expatriates in the U.S.   The Deutsche Luftwaffe (German Air Force) has had a presence at Holloman since 1992 and currently bases training for Tornado jets there.  About 450 German Air Force personnel together with family members live in the area and bring slices of German culture to the area.  The area offers great flying weather and has alot of air space to operate in over lightly populated south central New Mexico.   The German Air Force also has personnel at Ft. Bliss, TX  – 90 miles to the south. 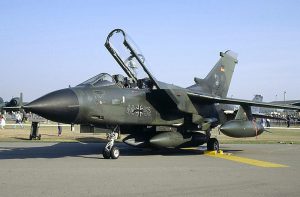 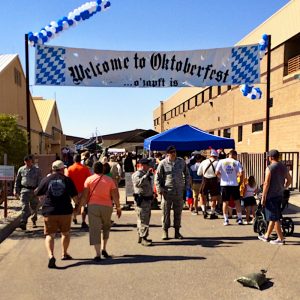 The German Air Force Oktoberfest is put on by the German detachment and welcomes the US Air Force personnel stationed at Holloman, their families, the people of Alamagordo, and the general public to a day of fun — German-style.  The average person cannot just drive onto the air base so an extensive shuttle bus operation runs all day and evening between the town and the base.  There are stops located convenient to motels and lodging throughout the town that make it safe and easy to attend.

I checked into a motel, donned my lederhosen, and was picked up at the nearby stop by a school bus from the Deutsche Schule, the largest public German school outside Germany.  Ten minutes later I was going through a security checkpoint operated by US Air Force personnel.  After being checked out, we boarded a second bus that only operates internally on the base for a few minute trip to the event.

Advance tickets were a reasonable $15 and included the free shuttle, entertainment, choice of a .5l commemorative clay mug or pilsener glass, and your first beer.  The festival is held from 3 to 11 p.m. at a huge German Air Force maintenance hangar and the adjacent apron.   The hangar is huge — not quite as big as the beer tents at the Wiesn — but very substantial.  It is decorated in the blue and white colors of Bavaria. A band from Pressath, Germany called the Pressather Musikanten was playing traditional music as I entered — it was easy to close my eyes and imagine I was at a kerwa in a Bavarian village. 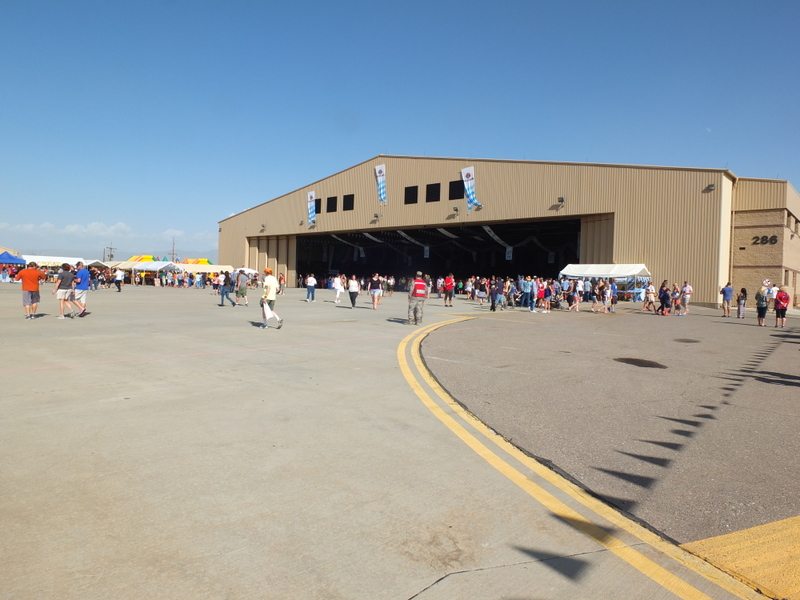 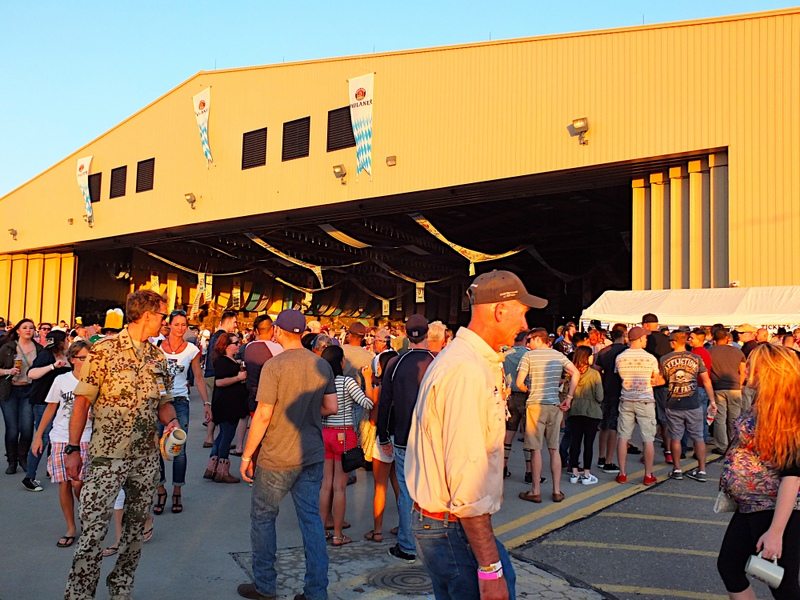 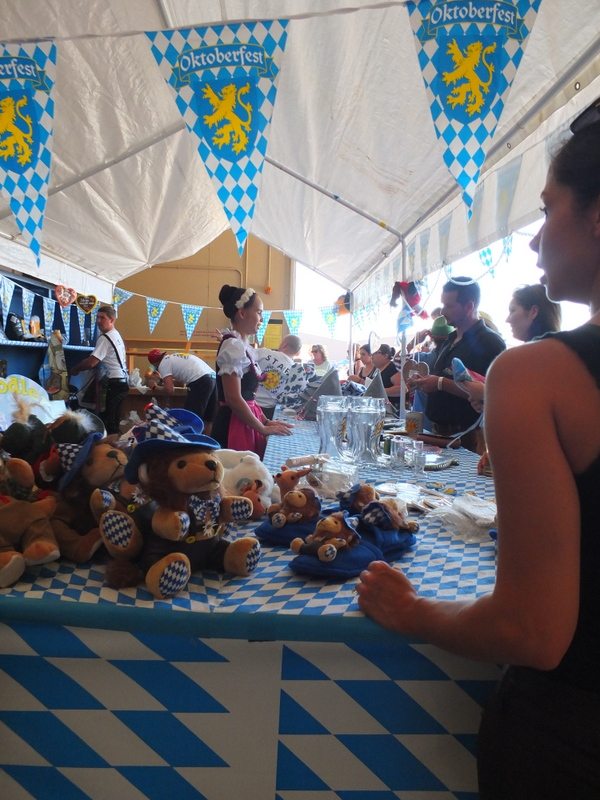 The festivities are kicked off with a ceremonial keg tapping.  The commander of one of the US Air Force units was given the honor and the commander of the German unit drew the first beer.  O’zapft is! 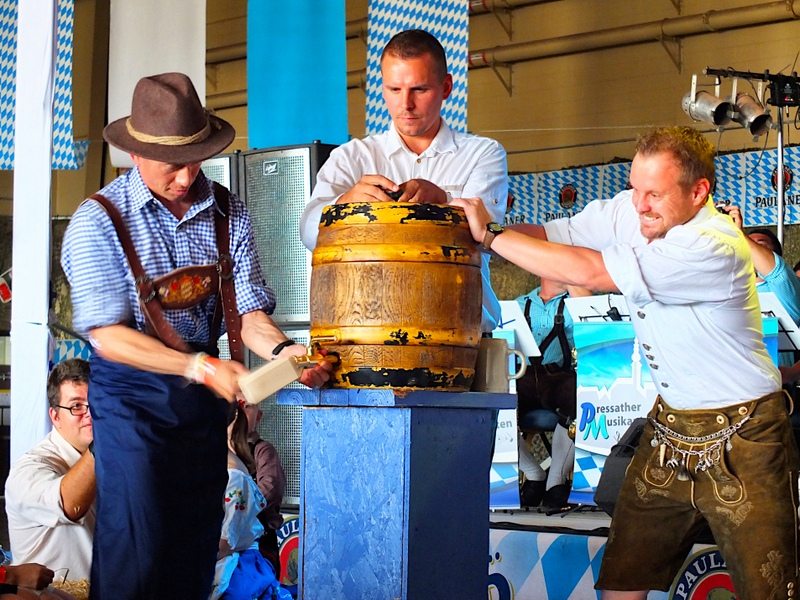 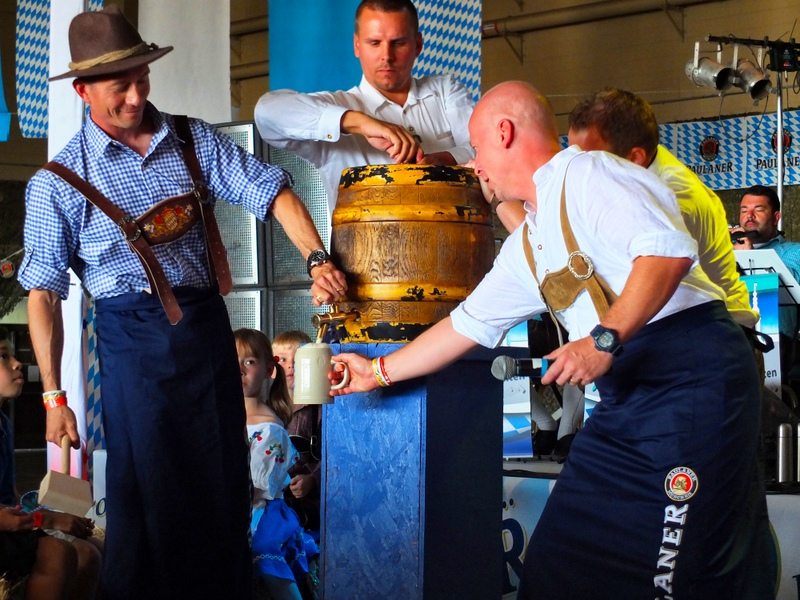 I am guessing that these two ladies are the wives of the commanders — on the stage for the tapping. 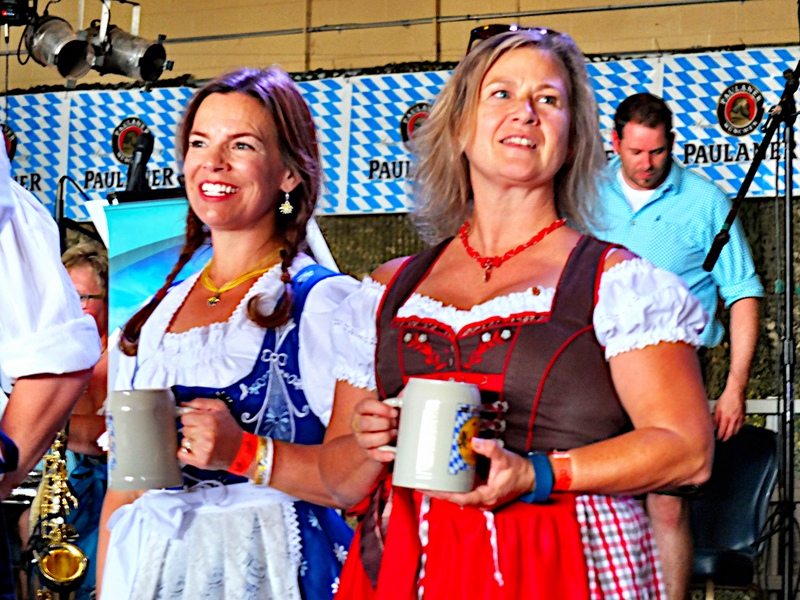 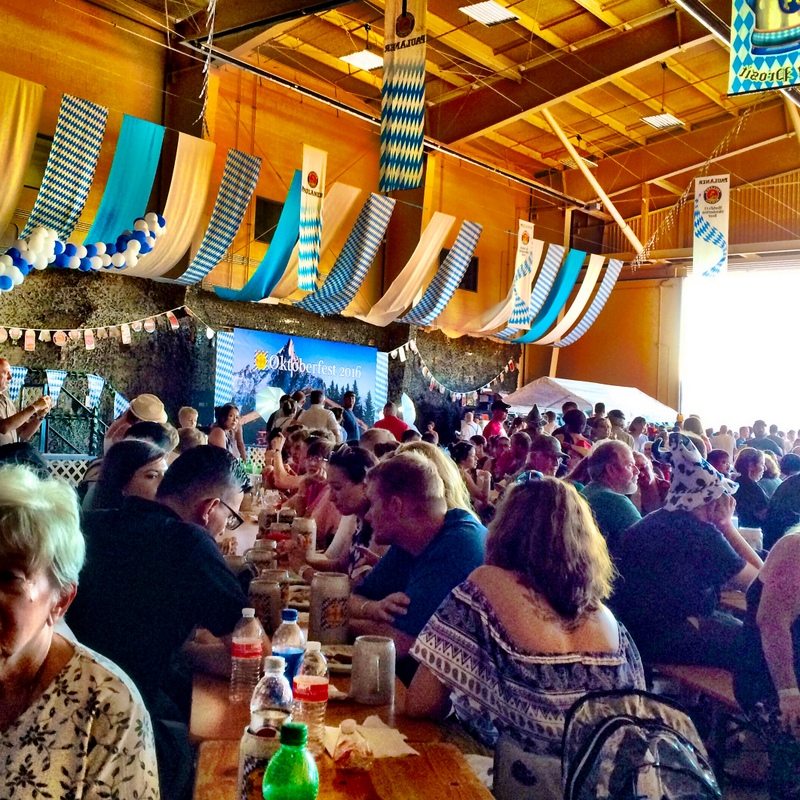 The food was good and reasonably priced. 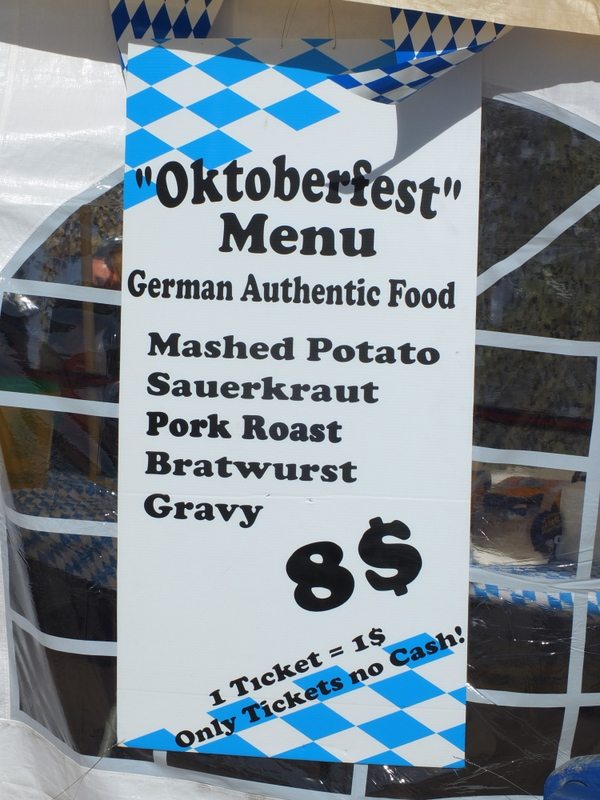 My guess is that all of the young guys pouring the beer were German Air Force personnel.  Friendly folks.  The beer being served was draft Paulaner Marzen — very tasty!  Prosit! 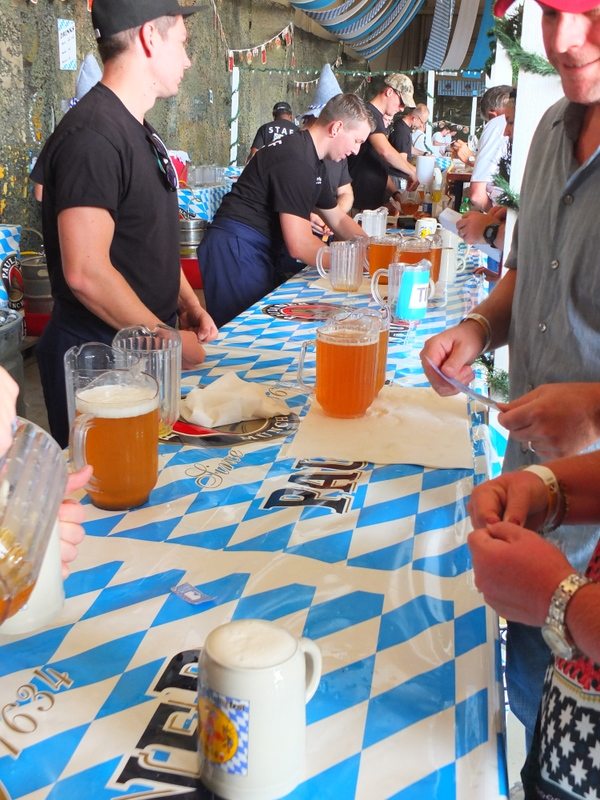 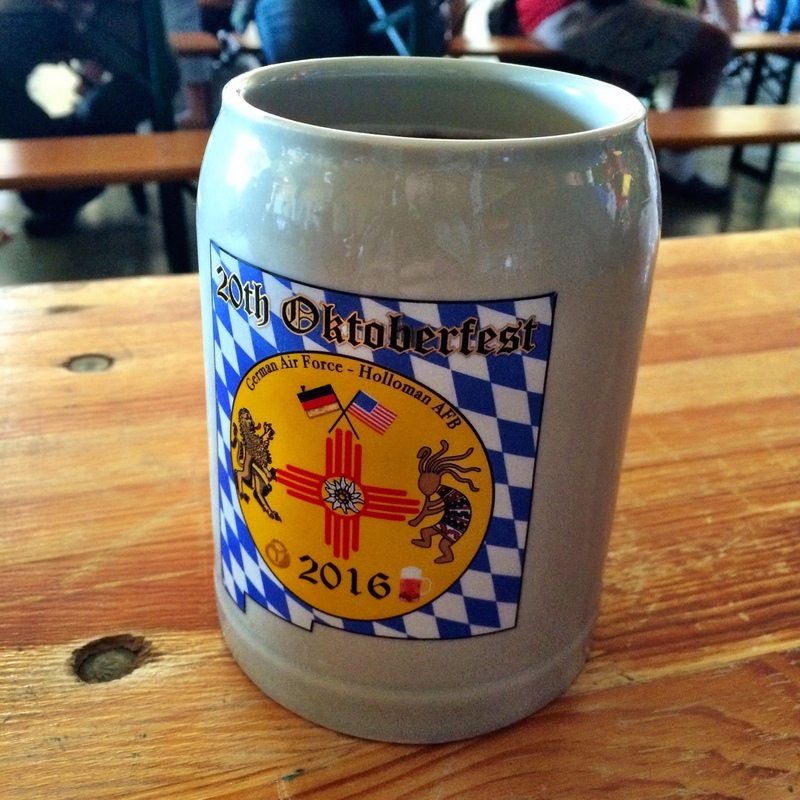 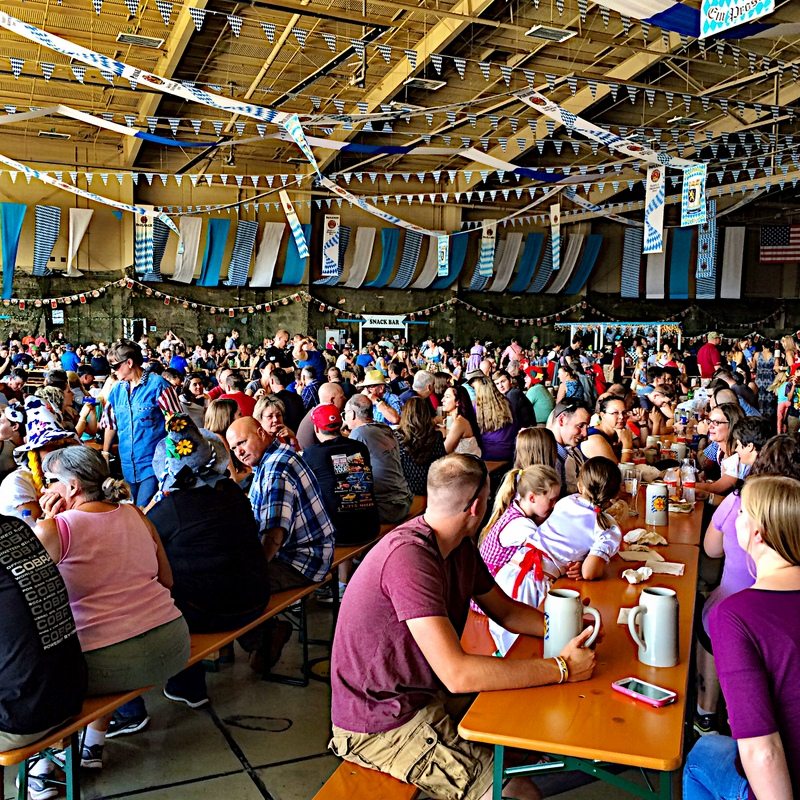 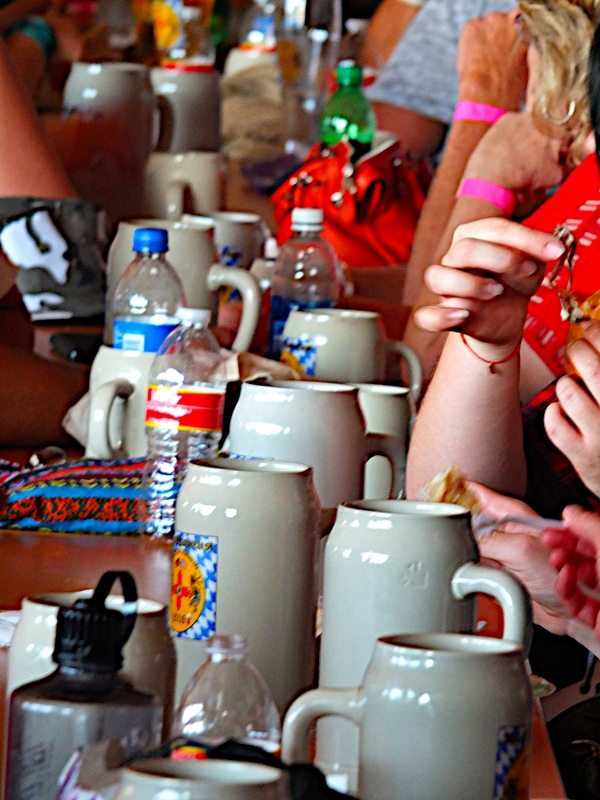 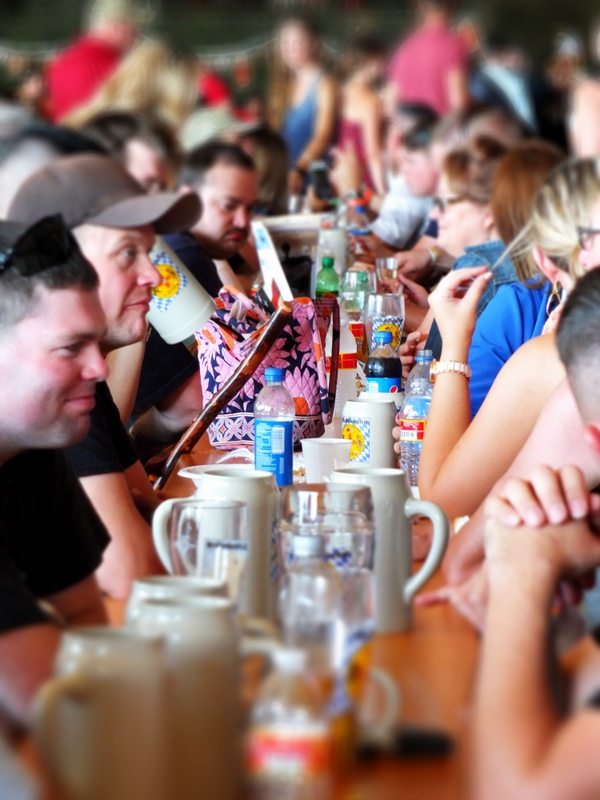 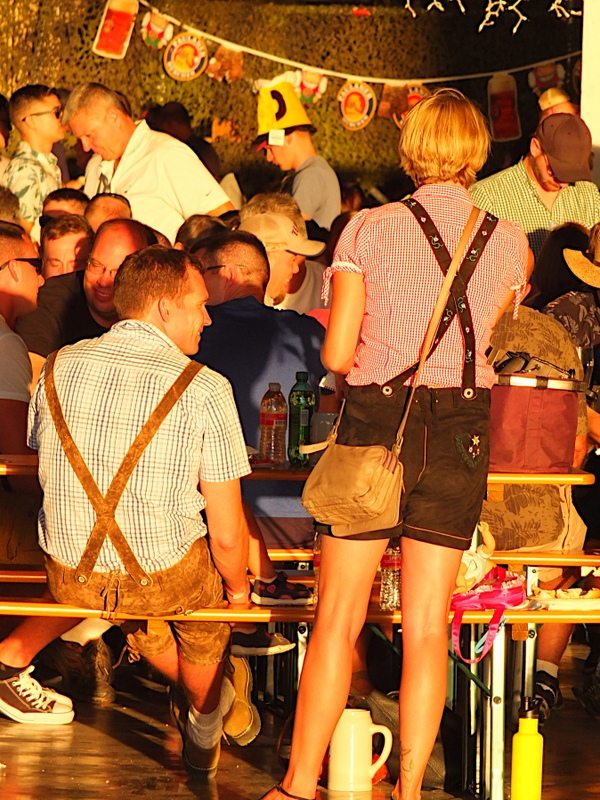 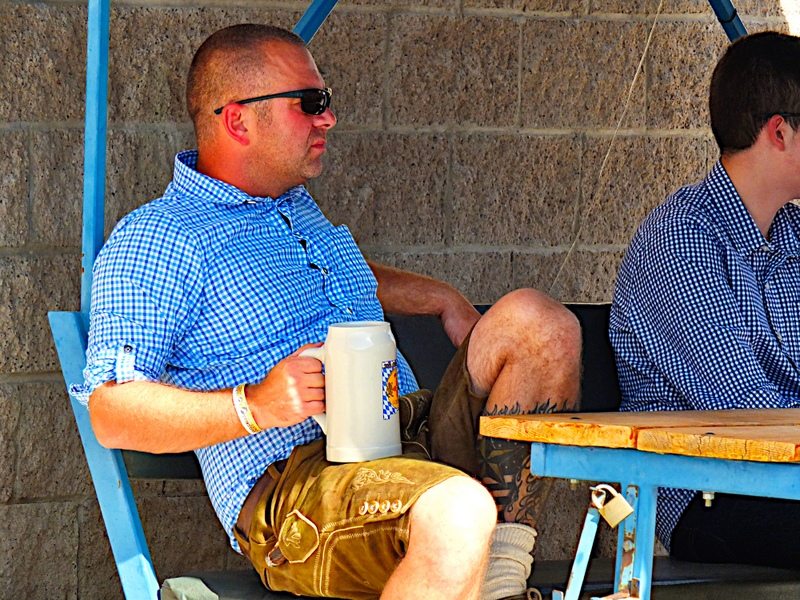 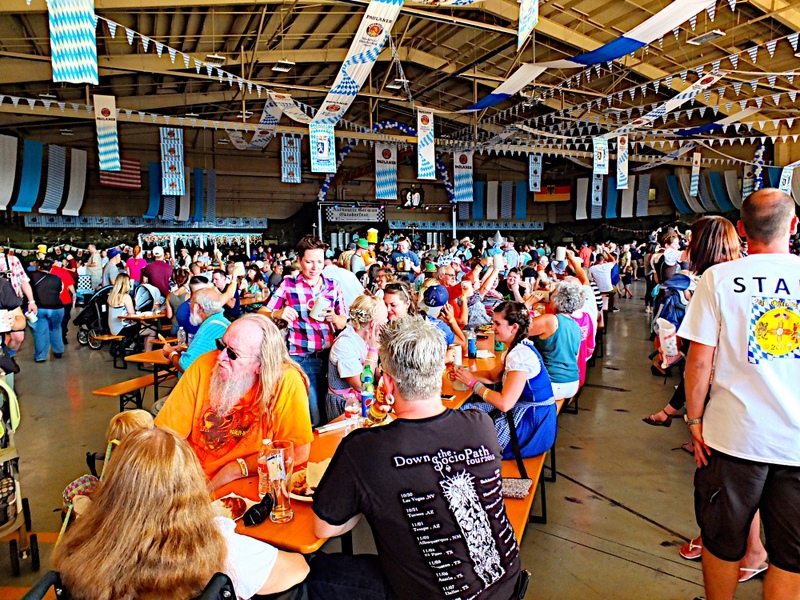 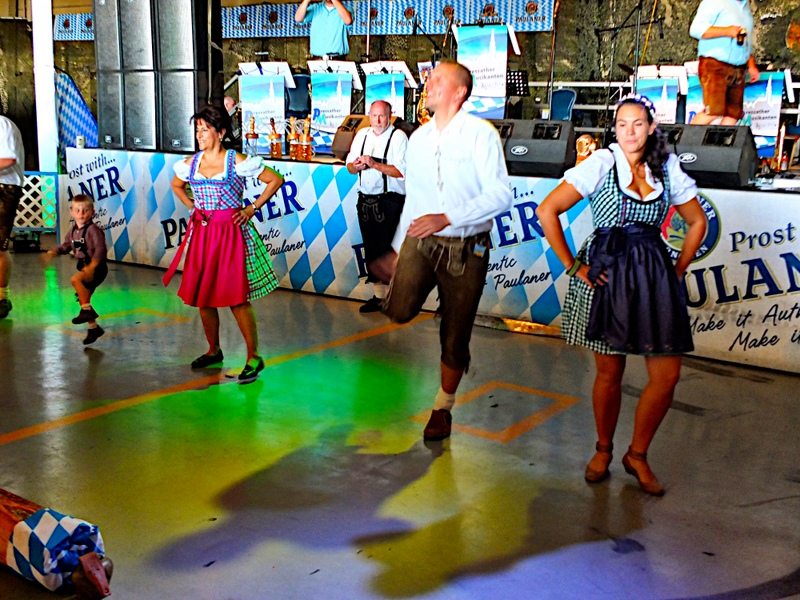 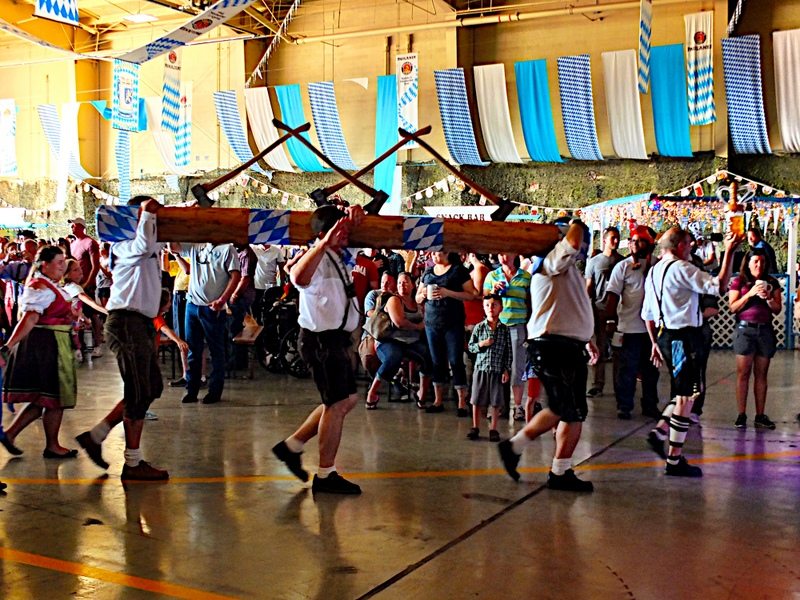 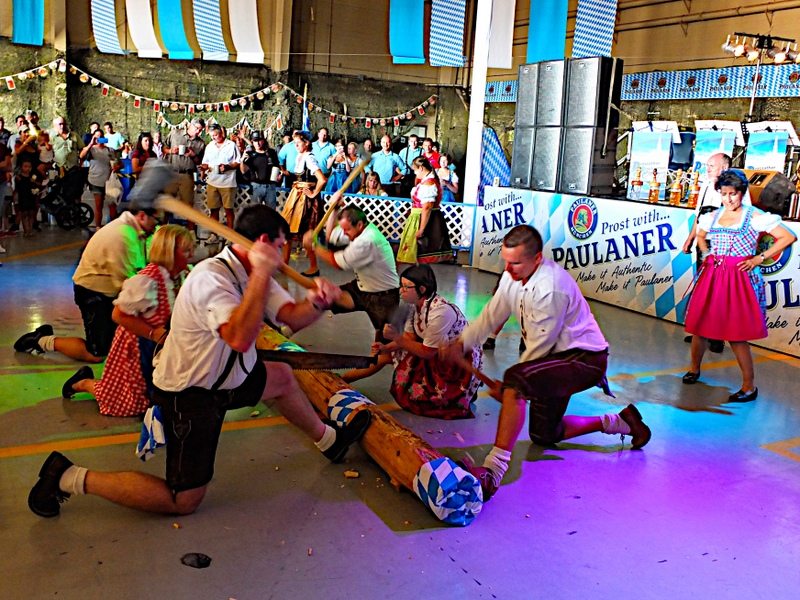 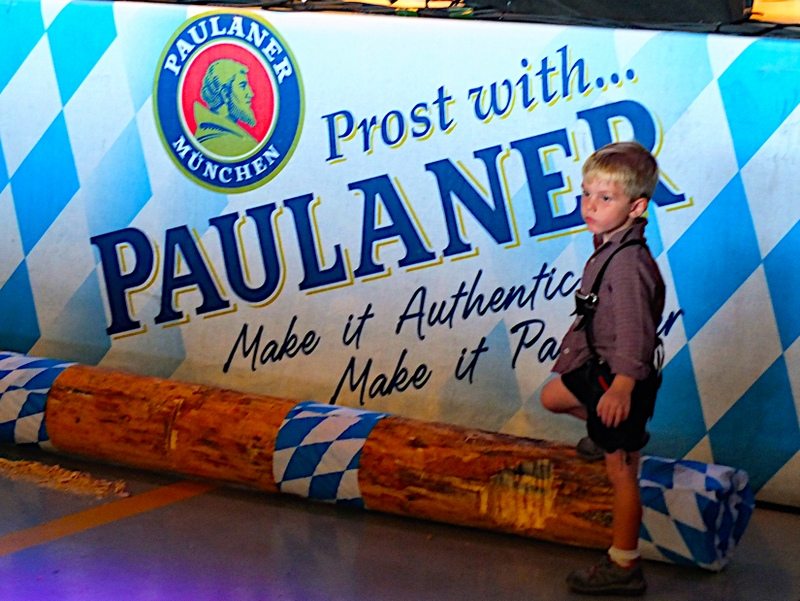 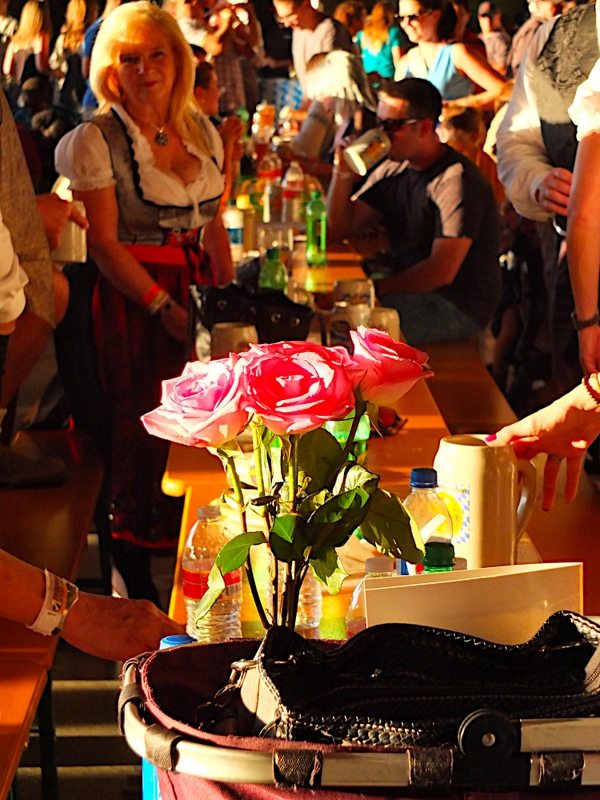 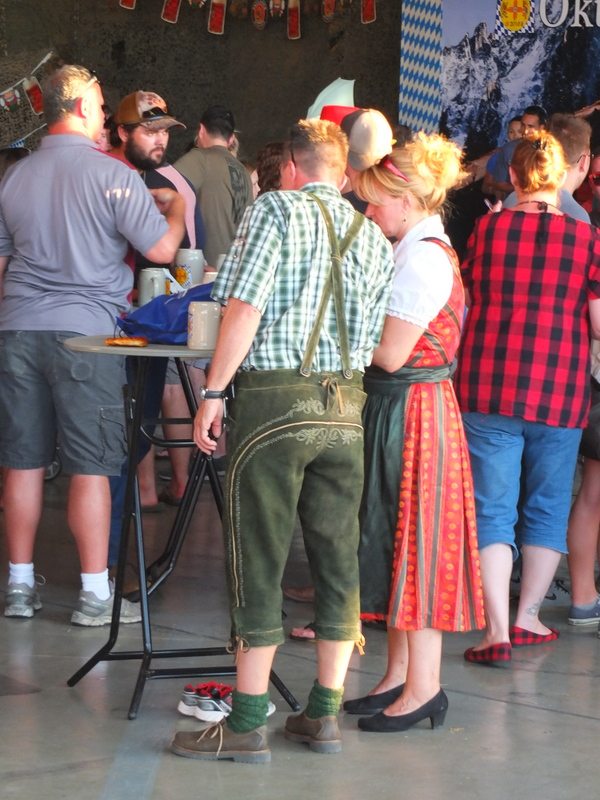 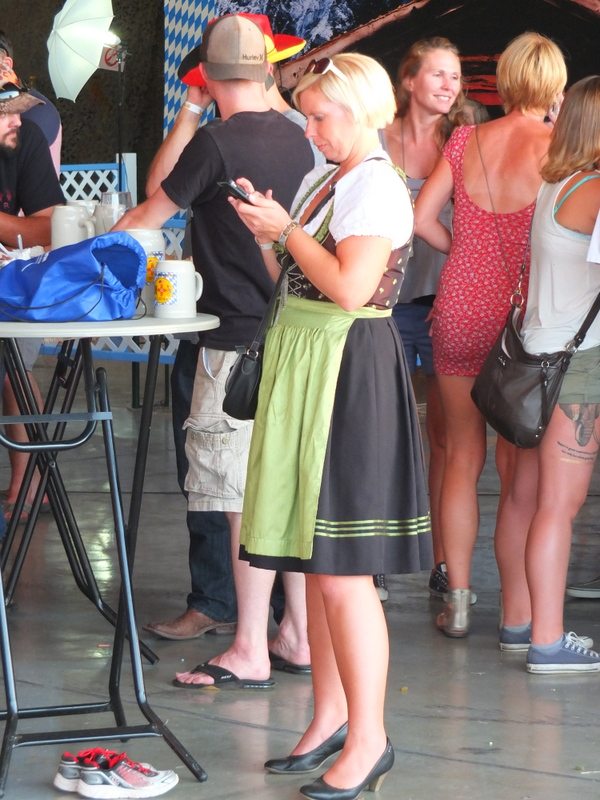 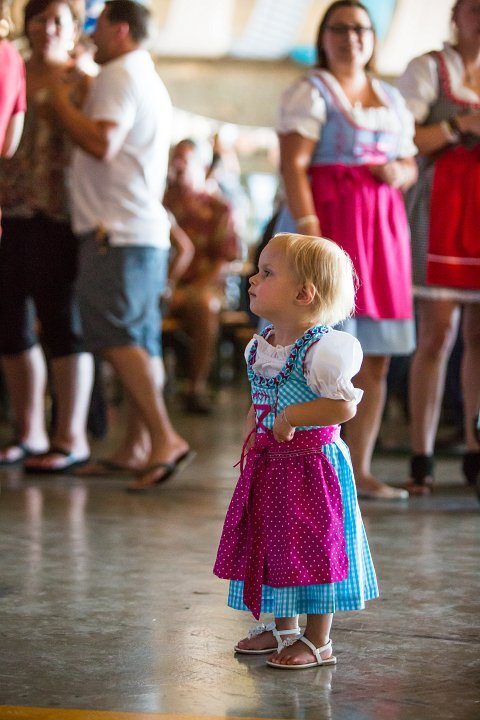 Earlier this year the German government announced that they would be withdrawing their presence from Holloman by 2019 so it seems that this event’s days are numbered.  The German squadron commander, in his remarks, acknowledged that the future of the event is uncertain and that it is probably too early to say precisely how things will evolve until 2019.  I’ll certainly try to continue to enjoy this event while I can.

As dusk began to set in across the desert, Pressather Musikanten transitioned from traditional folk music into classic rock covers (just like I think they probably do when playing in their home town) and the dance styles changed accordingly — it was time for me to find the bus for a short, sunset drive back to town. 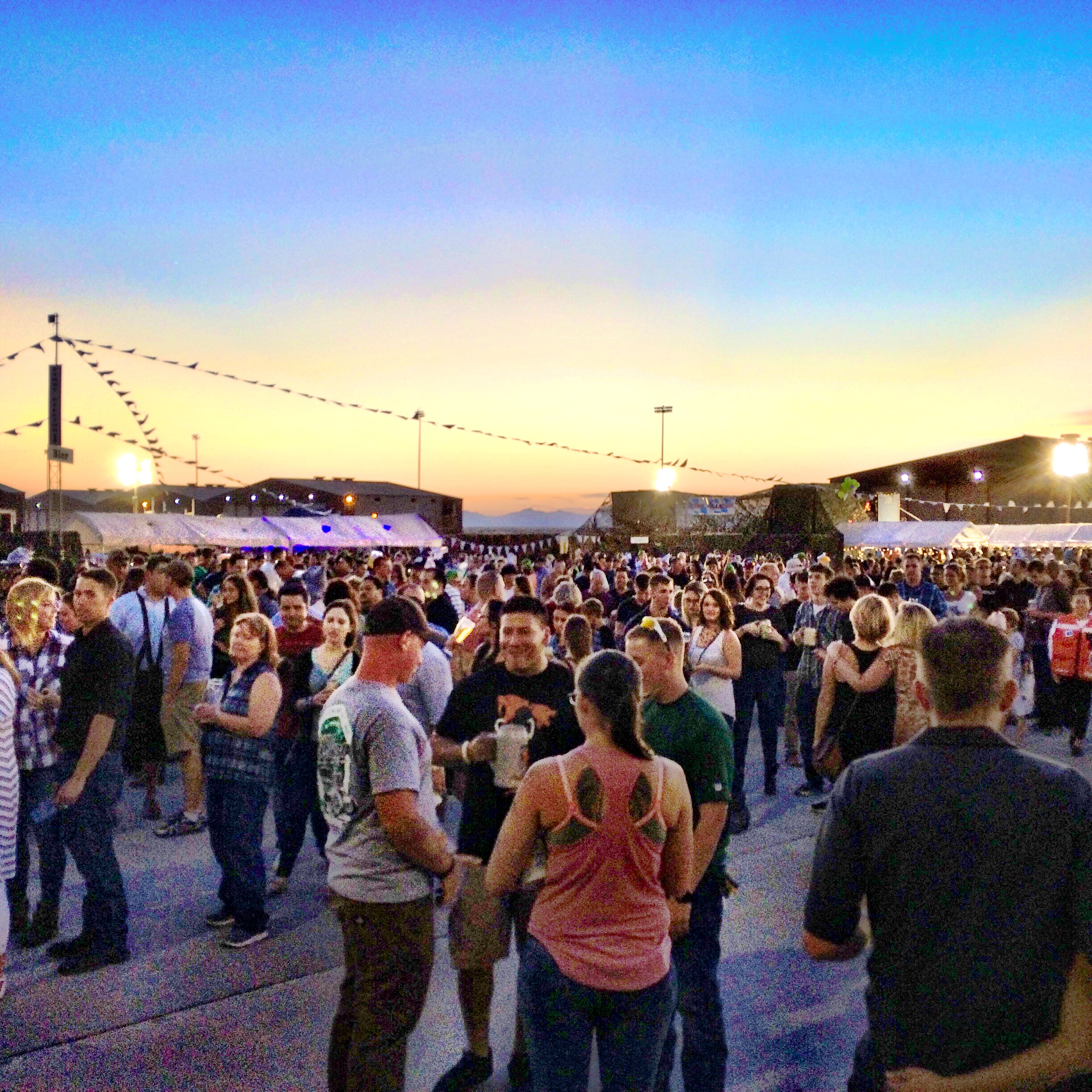