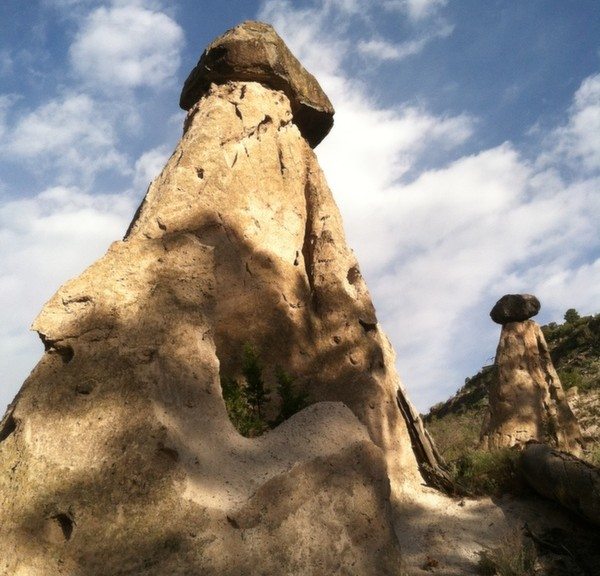 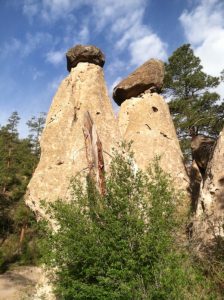 I dat hiker!  Hoodoos (maybe Hoo-dye is the plural?), if you’ve ever wondered, are distinctive geologic formations that typically consist of relatively soft rock capped by harder, relatively erosion-proof stone.  The result is a column that is eroding away underneath the capstone.  They are more commonly referred to as “tent rocks” in northern New Mexico, but I always liked the way “hoodoo” sounds .. lots more exotic sounding.

For the geologist types who may be reading this, check out the Wikipedia entry for starters to get the fuller lowdown on what these things are about.  Interesting, according to Wikipedia, “hoodoo” can also refer to “a traditional African-American folk spirituality” that is often wrongly confused or associated with voodoo … but that’s a whole different story.  Geologic hoo-dye are found in a variety of places throughout the world – often as a result of volcanic origins.

Northern New Mexico has alot of hoodoos.  In fact, there is a whole National Monument called Kasha-Katuwe Tent Rocks National Monument south of the location of the hike I will describe that is also a cool place to see and hike among the hoodoos.

But this particular hike is located near Los Alamos, New Mexico, 35 miles to the northwest of Santa Fe.  On a map, the hike looks to be right in the heart of Los Alamos, which it kind of is except that it is in a canyon-bottom hundreds of feet below the community which sits on the mesa tops above.

It is safe and easy to place a car at either end of this hike to make it a one way journey, or if you happen to come on a weekday you can do what I did and ride the bus.  On weekdays, Los Alamos has a free, frequent bus service called Atomic City Transit (website & schedules).  I caught the Route 2 bus at the Aquatic Center (free parking there) for the five to ten minute ride to the Eastgate stop and the Camp Hamilton trailhead. 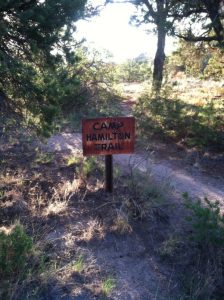 Camp Hamilton Trail is an historic trail that was built by the Los Alamos Ranch School students and staff circa 1920 to provide access to a cabin and camping area in the canyon below.  I once hiked with a former student of the Ranch School who told me that the underclassmen went to Camp Hamilton on camping excursions while the upperclassmen went up to Camp May near what is now Pajarito Ski Mountain.  They also built the trail now called the Ranch School Trail which also figures into the route for this hike.  A great place to learn about the history of the Los Alamos Ranch School is the historical museum in Los Alamos.

Camp Hamilton trailhead sign near the intersection of Highway 502 and Eastgate Drive.

Camp Hamilton trail makes a dramatic descent into Pueblo Canyon with big views east across the Rio Grande valley to the Sangre de Cristo Mountain Range.  The route up canyon on the floor of Pueblo Canyon follows an old utility road that criss-crosses a stream bed that runs intermittently.  This canyon doubles as a utility corridor for the neighborhoods on the mesas above, so you encounter some ugly infrastructure now and again … except for that, you could easily imagine you are in a National Park-like setting.  The hoodoo formations begin popping up about a mile up canyon and dot the landscape on both sides of the trail. 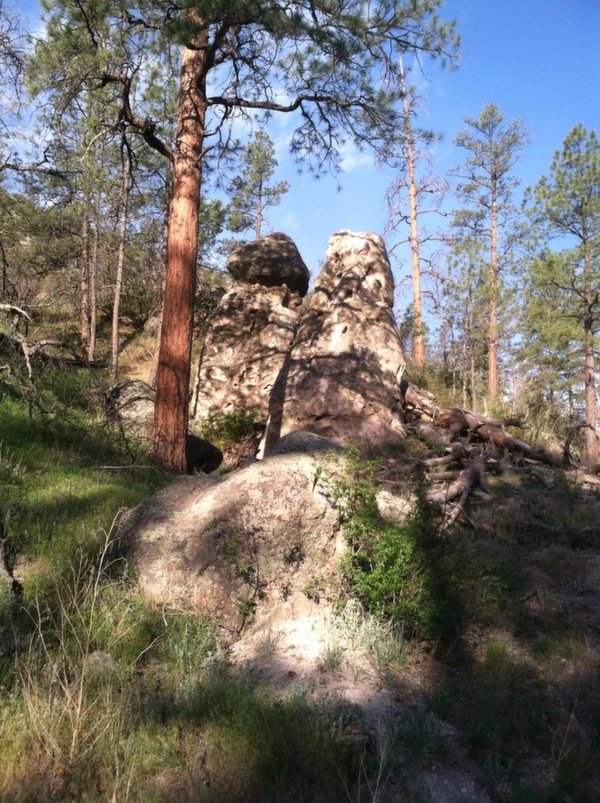 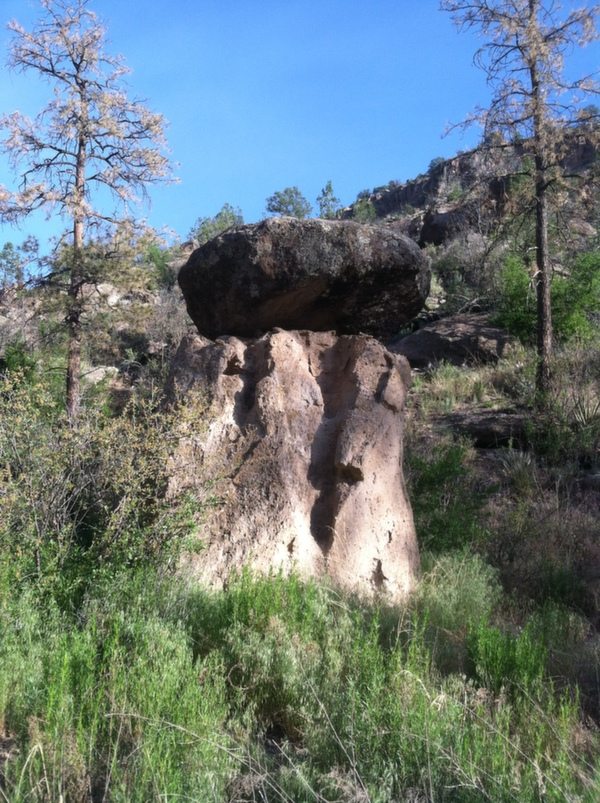 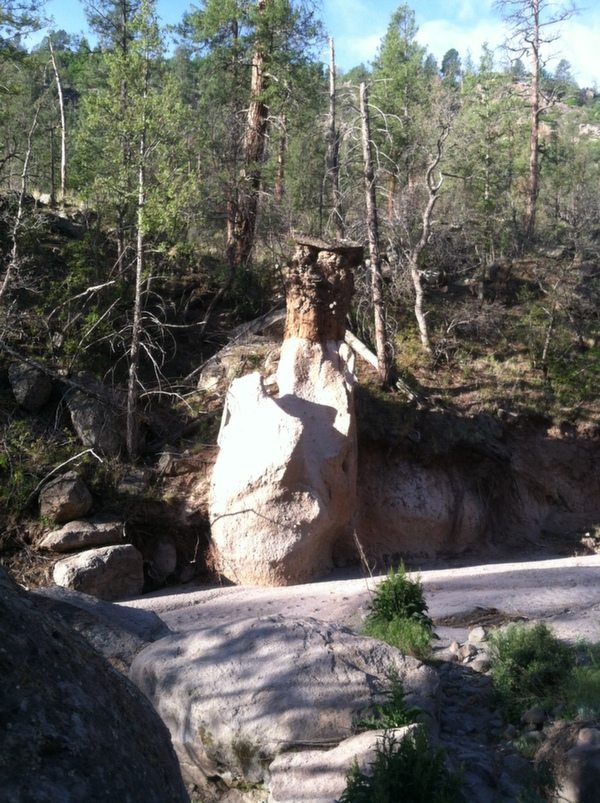 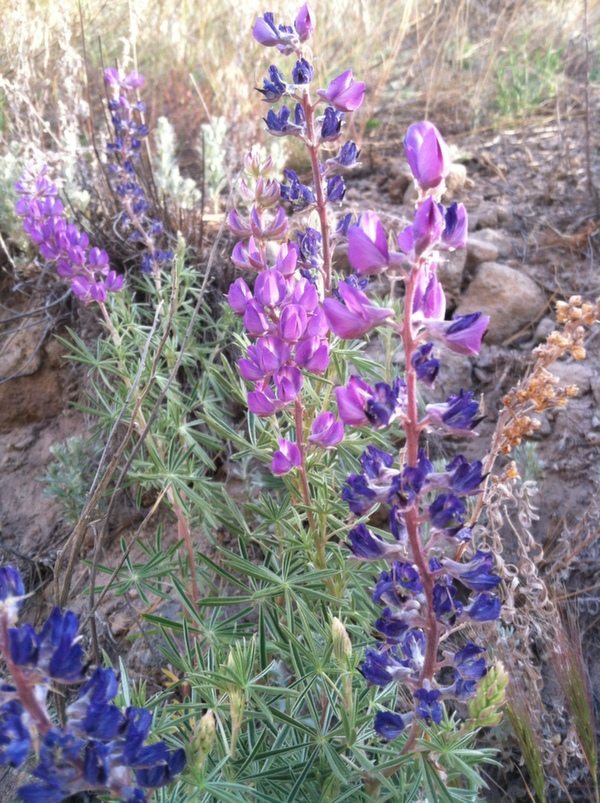 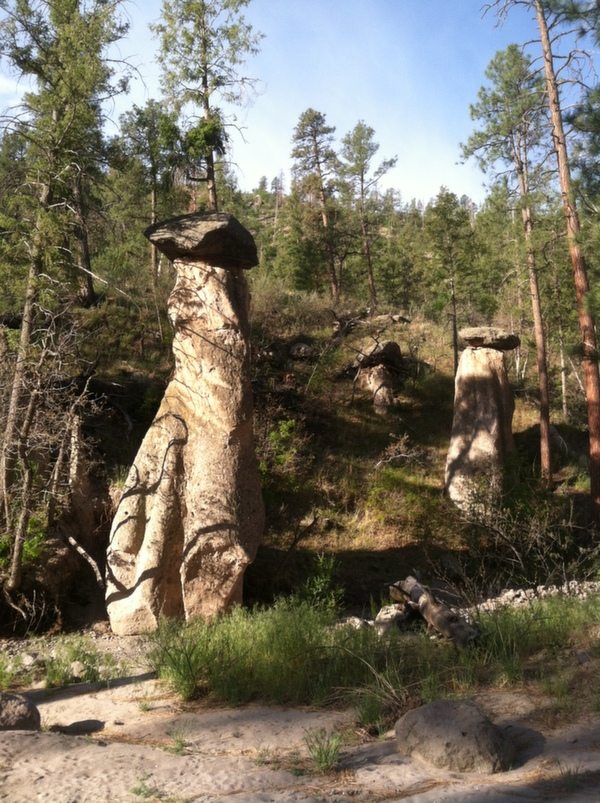 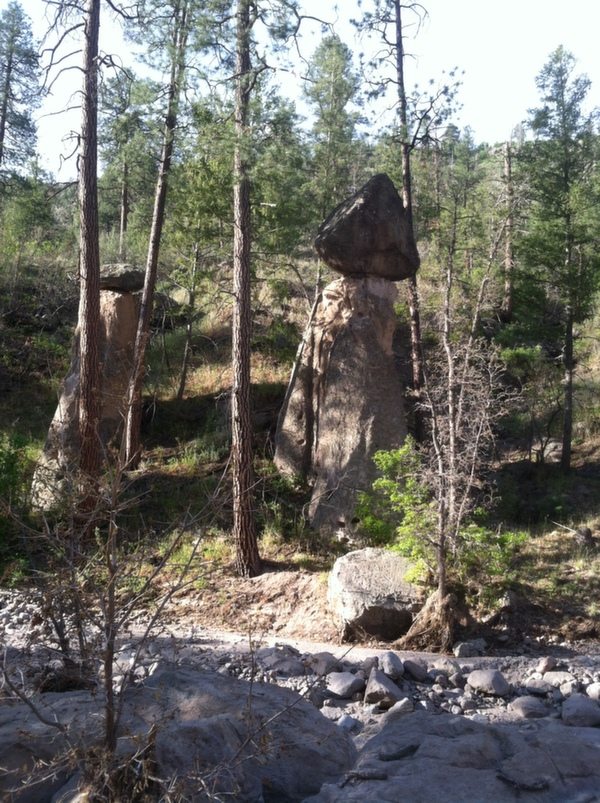 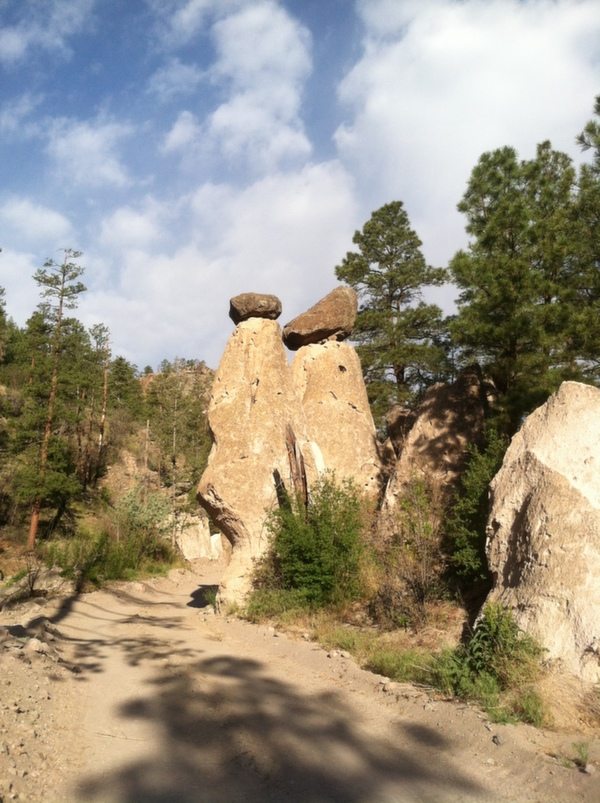 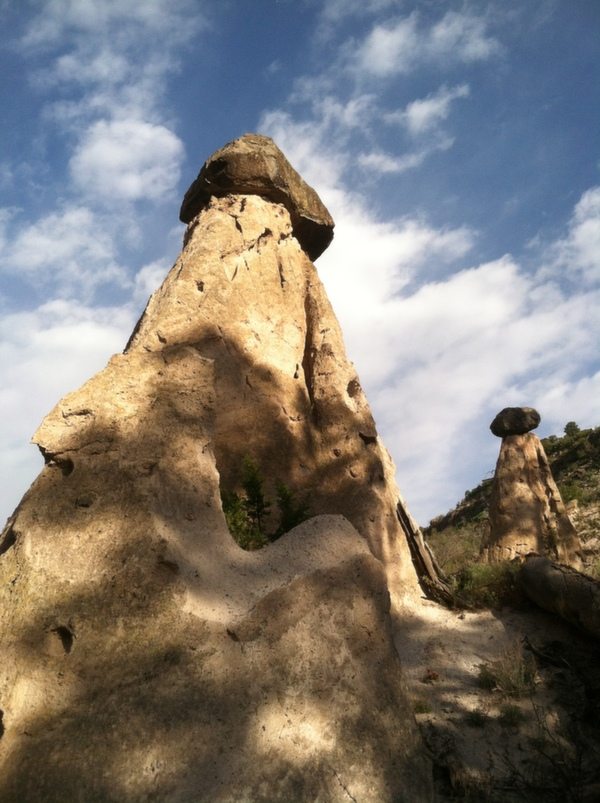 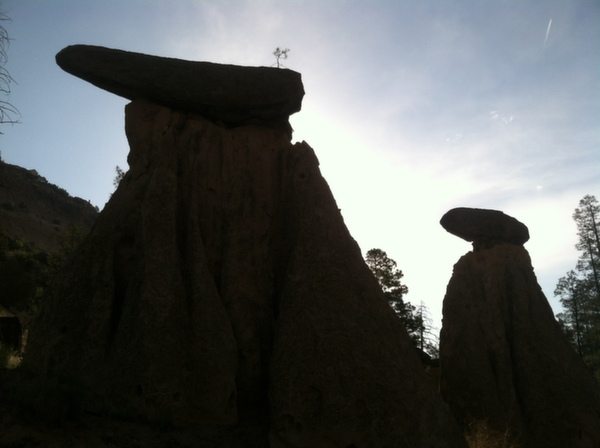 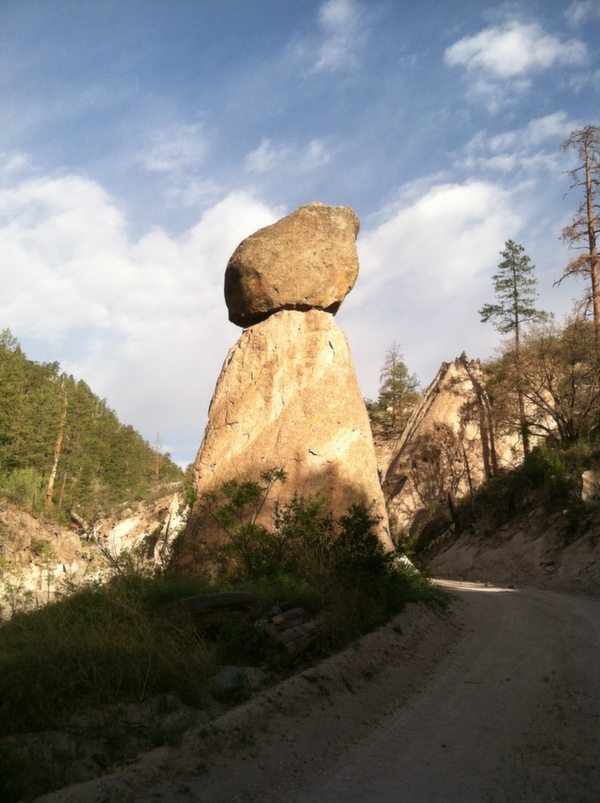 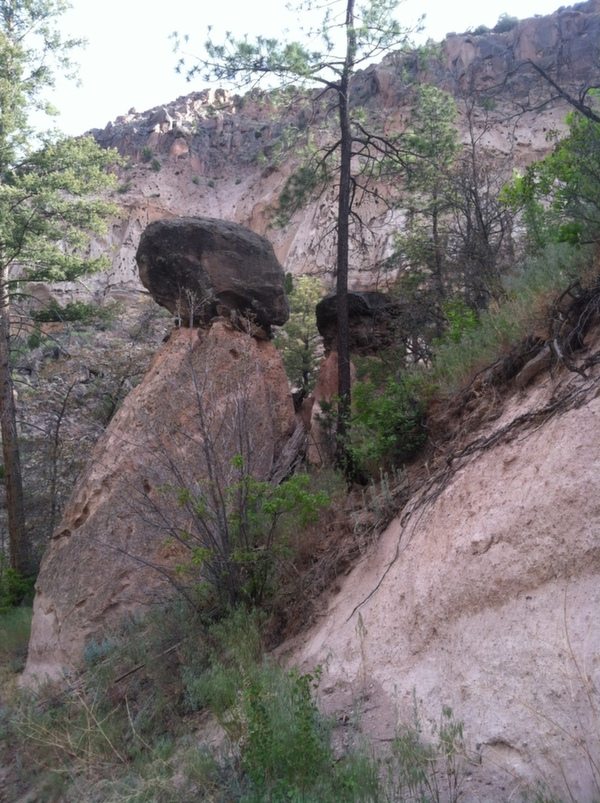 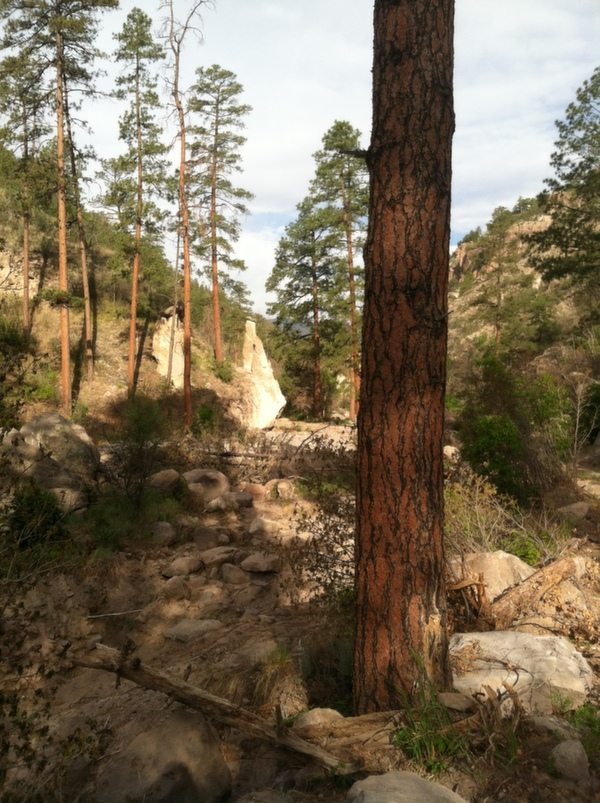 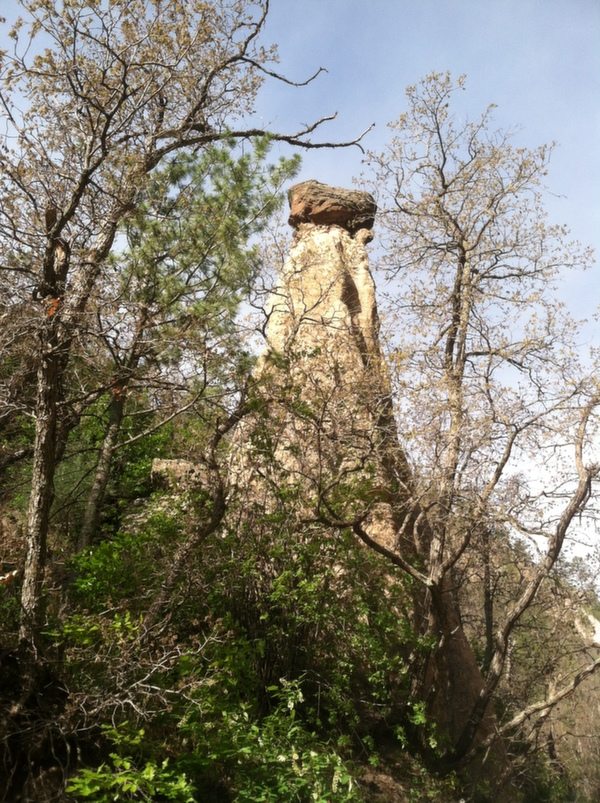 Vegetation in Pueblo Canyon on the hike route 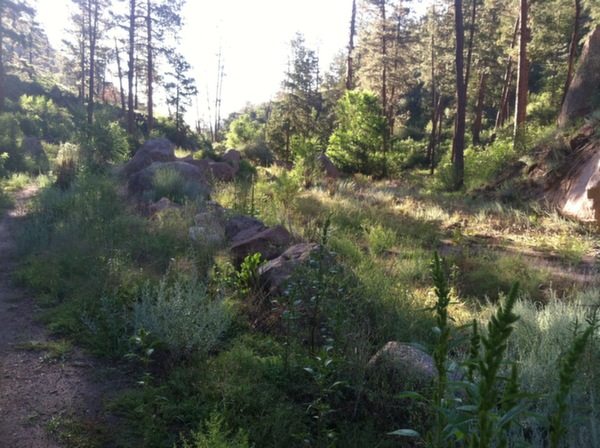 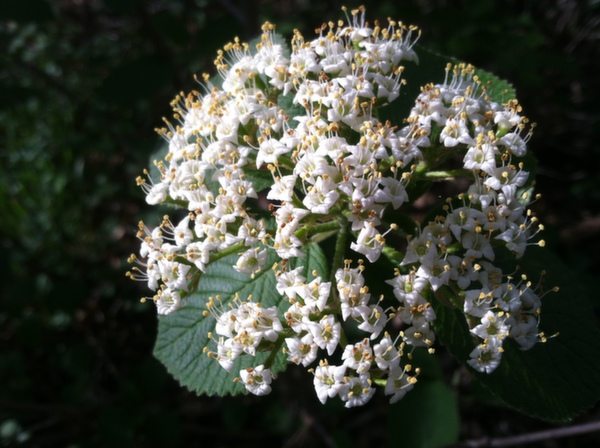 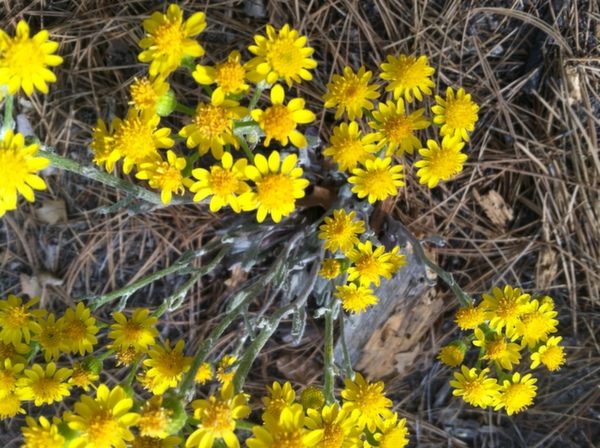 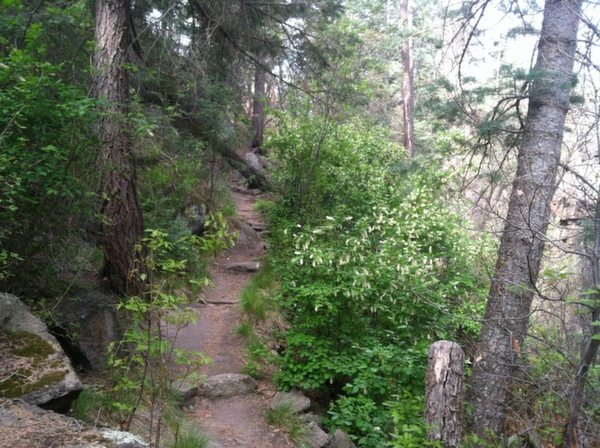 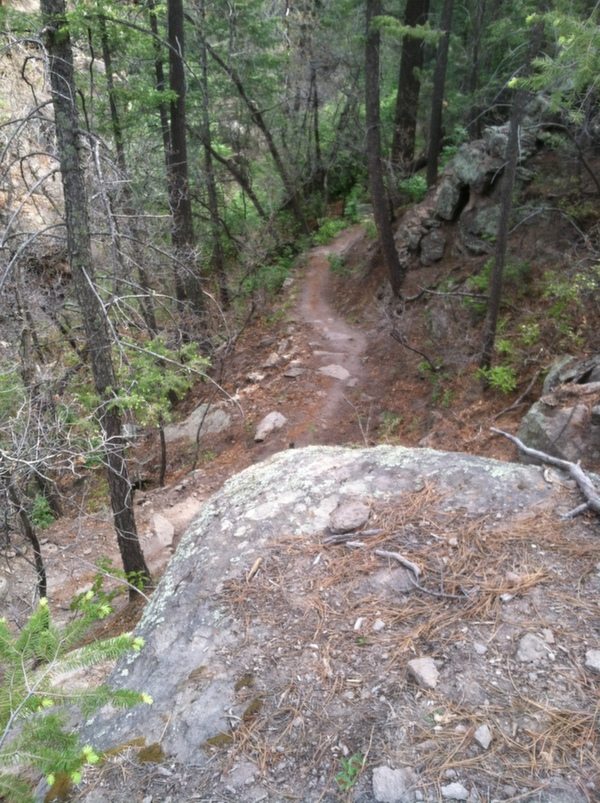