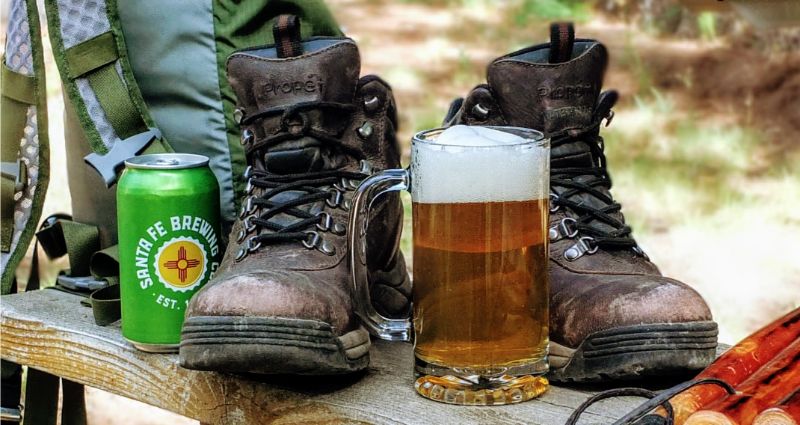 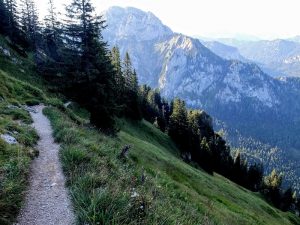 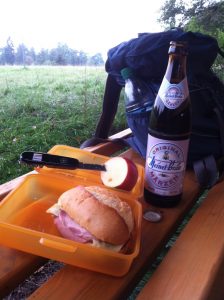 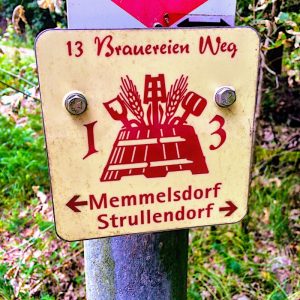 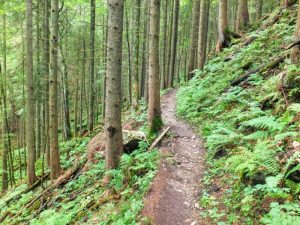 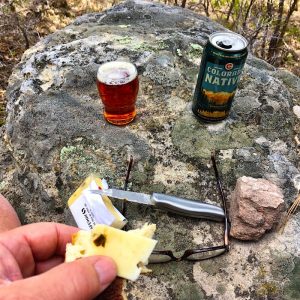 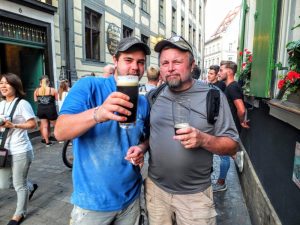 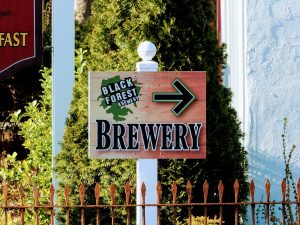 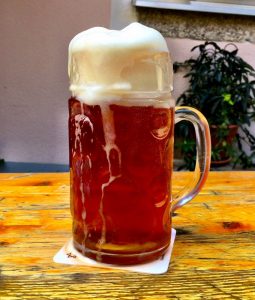 When I tell people about my blogging hobby, it’s not uncommon to hear the response, “What is beer hiking?”  For me, hiking is about so much more than exercise – or a walk in the woods – or getting from point A to point B. It’s really more about the sum of all of the sensory experiences along the way – sights, smells, sounds, textures can all be savored in small bits and connected to the memory of a hike. Newness or familiarity can be another aspect of the memory – a novel experience tends to be memorable although the familiar can also generate a comfortable, warm memory.

I find that adding a beer into the mix, whether during or after the hike adds yet another layer of sensory experience that isn’t naturally there on a hike.   Beer adds its own set of sights, smells, texture, and tastes.  Often a beer hike also increases prospects for interesting cultural experiences.  That might mean tasting the local style of brew, listening to the music, observing local characters and local customs, and talking both with travelers and locals over a beer.

For me, a beer hike can take many different forms.  There is the simple ‘enjoy a beer after the hike’.  Another form is the ‘carry beer with on the hike and stop in a beautiful place to enjoy it” approach.  Another approach is to research and complete hikes where there are breweries or other interesting beer-drinking venues along the route.  This last approach (my personal favorite) can either be out in the wild or countryside, or it can take the form of an ‘urban beer hike’ or walk.

There really aren’t any rules other than to be safe and have fun.  There is considerable opportunity for creativity in planning the route or hike … and beer always tastes better to me in conjunction with a beer hike.

Stories and images about beer hikes are a prominent part of Prime Passages and I’m also doing some beer bike rides from time-to-time.  Have a look at some of the stories here.  Hopefully, they’ll inspire you to invent your own beer hikes.   If you do and you want to share your beer hiking experiences with others, there is a public Facebook group called Lovers of Beer, Hiking, and Travel that exists for just that purpose.

With all of that said, beer hiking can certainly be a different thing for different people, though.  So I queried some fellow beer hikers for their perspectives (below) and I hope that readers will contribute their own perspectives as well by commenting on this post.

Rich Carbonara, the Beerwanderer is an American ex-pat living in the Munich area.  He leads hikes in Bavaria and is the author of Beer Hiking Bavaria. 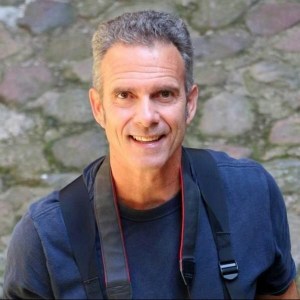 Beer hiking is any combination of the two you can come up with but for me, it’s using your feet to get to breweries you can’t really get to any other way (well, if you don’t have a car, can’t drive in the country you’re living in, or know better than to drink and drive).

The best beer hike is always the next one, the one you haven’t done yet. For sure design and relative ease, it’s tough to beat the Fünf Seidla Steig in central Bavaria. 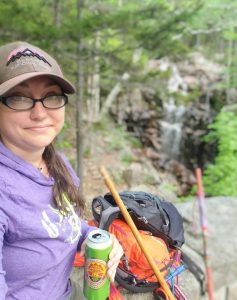 A beer hike is anytime you get outside hiking and bring along a beer. Pretty simple, right? It can be a mile or ten, as long as you take a few minutes to sit back enjoying nature with a cold beverage in hand!

The best beer hike I’ve experienced was Cadillac Mountain in Acadia National Park. Not only did we have a beautiful view, but I got to share the experience of a friend’s first beer hike! That’s what really makes a beer hike, sharing with friends.

Beers at the Bottom

Brandon Fralic and Rachel Wood author Beers At The Bottom – a blog exploring the natural relationship between the craft beer community and outdoor recreation.  Based in western Washington state, they have written and published a book called Beer Hiking Pacific Northwest. 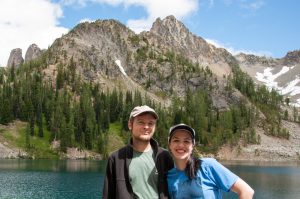 Simply a day of hiking that ends at a brewery. When pairing trails and breweries we take it a step further, seeking out breweries that have a link to the outdoors community and surrounding environment. Take Kulshan Brewing in our hometown of Bellingham, WA, for example. Named after the local volcano (Koma Kulshan, or Mount Baker) Kulshan Brewing incorporates outdoorsy elements into its taprooms and beer names. We’re quite lucky that so many breweries in the PNW have an outdoor focus, creating taproom spaces that often feel like an extension of the trail. You feel comfortable raising a pint there — even in your grubby hiking clothes!

There are far too many to pick just one, so we featured 50 favorites in our guidebook, Beer Hiking Pacific Northwest. We’ll give you a fave from each region. In British Columbia, we enjoyed spending 3 days on the Sunshine Coast Trail, ending our time with a beer from Townsite Brewing in Powell River. In Oregon, we loved the untamed coastline of Cape Perpetua, and finishing the day off with wild farmhouse ales from Yachats Brewing. And we are absolutely spoiled here in Washington for beer hikes. One of our local favorites is pairing the hike to Winchester Mountain Lookout (or just about any trail along Mount Baker Highway) with beers and pizza at The North Fork Brewery. Order the nitro ESB or one of their excellent sours!

Tempest in a Tankard

Franz Hofer authors Tempest in a Tankard – a blog featuring stories about beer and beer culture.  Based in central Oklahoma, Franz is currently working on a book entitled Beerscapes of Germany: Where Tradition Meets Innovation. 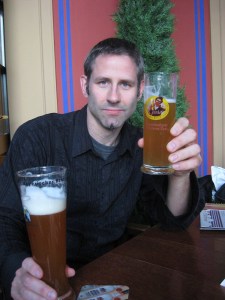 For folks who haven’t heard yet, beer hiking is a thing. But what is this thing we call beer hiking? On the surface of it, you combine beer with hiking. Pretty simple. But it’s actually more than just tossing a few cans of beer into your rucksack and hitting the trail. Rather, beer hiking encourages hikers and walkers to explore the beer or beer establishments of a particular place as part of the journey. For some, that might mean going on a road trip, finding a trail in relative proximity to a brewery or taproom, and tucking into a few pints at the end of the excursion. For others, beer hiking involves searching out trails where there’s a brewery (or two), either along the way, or at the end of the hike.

To me, what sets the “best” beer treks apart is a combination of adventure, varied terrain and scenery, regional food, and, of course, stellar beer — the closer to the source, the better. Taken together, these elements should also provide some sort of window onto the local culture.  All of my beer treks have been memorable for some reason or other, but my favourite to date has been the granddaddy of Bavarian beer treks, the Fünf-Seidla Steig, or “five stein climb.” The number five refers to the number of breweries along this classic 18-km loop, which also gives you an idea of how much extra time you’ll need to budget in order to complete the journey in a day.

Yitka Winn is the author of Beer Hiking Colorado and is an ultrarunner, snowboarder and lifelong lover of mountains. Yitka blogs at Yitka Winn. 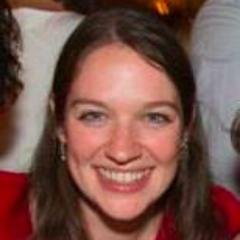 It’s the opportunity to explore new places through the lens of two of the greatest things on earth–trails and beer! Hiking can often be a solitary affair, an escape from the clamor of civilization–and bringing a can of beer with you into the wild (and packing it back out after you’ve enjoyed it!) is certainly one way to partake in “beer hiking.” But personally, I also really love visiting a brewery after a hike, especially if it’s one owned by outdoor enthusiasts whose passions shine through in the way they’ve designed their taproom, or named, illustrated or even flavored their beers.

I spent several months road-tripping all over the state of Colorado to do the necessary recon (i.e., hiking and beer-tasting) for my book, Beer Hiking Colorado–and midway through that season, someone asked me I planned to include the town of Crestone in my book. I’d never even heard of it, but this person insisted that I had to check it out. I’m glad I did, because it led me to one of my favorite trail/brewery combinations in the whole state! Crestone is a quirky little town, known as the “Shangri La of the Rockies” that’s home to dozens of ashrams, monasteries, temples, meditation centers and other sacred sites. It’s right at the foot of the majestic Sangre de Cristo Mountains–the particular hike I featured is to a waterfall-surrounded alpine lake called Willow Lake–and its relatively new brewpub, Crestone Brewing Company, serves up amazing nanobrews (three barrels or less per batch). You can’t go wrong with a sampler flight and one of their local yak burgers.

Tom Rankin is the originator of Views & Brews, a beer hiking challenge for beer and hiking lovers currently in 20 U.S. States and two Canadian Provinces 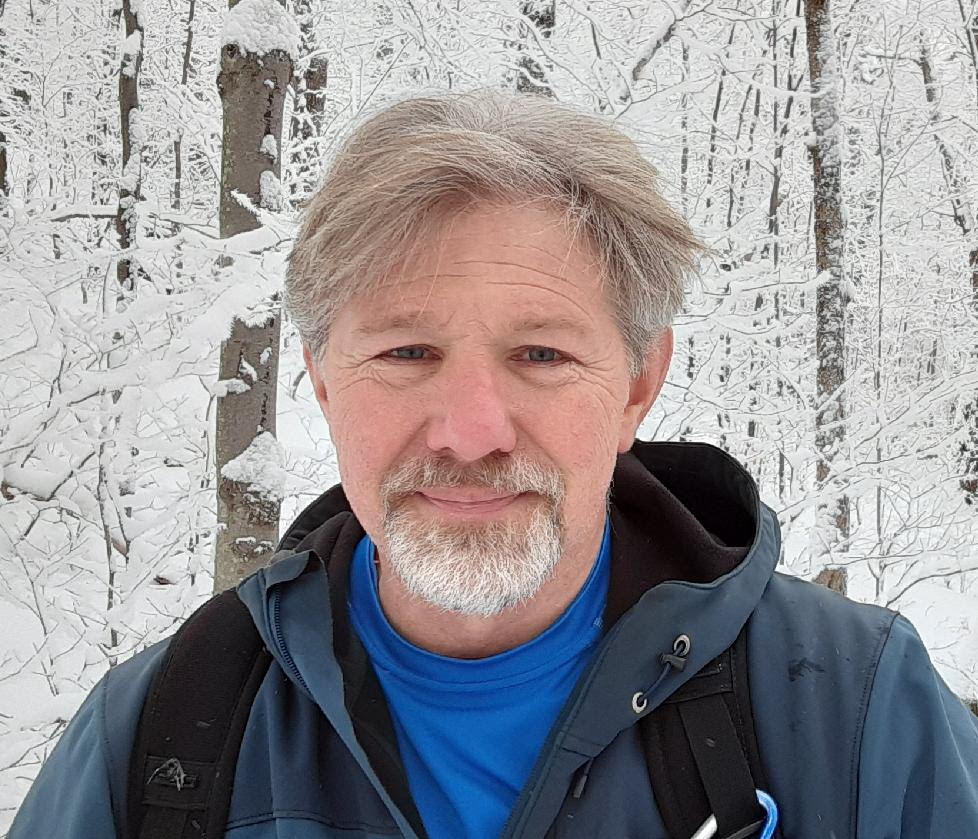 Beer Hiking is planning to go for a hike and then visiting a brewpub, optimally, to find a new hike and a new beer.

Our best beer hiking adventure was on a trip we took to a trip we took to Long Island. Day 1 – Chelsea, Brick House, and Black Forest Brewpubs. Brick House was where we met legendary ‘Miss Kitty’, the mother and grandmother of Brewers. Black Forest had just won the best brewery in NY award, and they had a Jalapeno-Cilantro Ale, which was the first beer that ever made me sweat! They also were selling beer really cheaply that night! 😉 Day 2 – Fire Island (naked hikers were seen), Southampton Pub, where entitled princesses sat next to working stiffs, and John Harvard, where we had to walk off the last few beers in an endless loop around the parking lot!.

One thought on “What is Beer Hiking?”